In 2019 we were looking for 30 minute One Act Plays on the theme Faith Within a Contemporary Context.  The plays may cover any aspect drawn from one or several verses of Ecclesiastes 3: 1-6 in the Old Testament.  They can be an outright comedy or a more serious approach but still showing touches of humour.

Scripts were judged by a team of distinguished judges, including theatre and radio directors and producers.

Methodist Central Hall, Westminster was the scene of the ACG’s National Drama Awards Day on Saturday the 26th of October 2019. 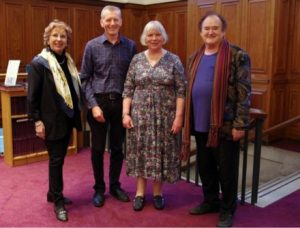 Hosted by Tony Jasper, the day commenced with a lecture by renowned theatre coach, Clare Davidson, who spoke about the changing nature of theatre.  Clare has some 50 years experience in the world of theatre. She recounted times working on the film Chitty Chitty Bang Bang and in Pinewood studios in the 1960s. In those days no-one had a personal camera on the set and, with film cameras in place, the set was almost a sacred space. Now everyone has a camera so its not quite the same. She recounted how in the 1960s you could just walk into Pinewood studios and in the café you might see the likes of Roger Moore or other famous actors. Now the security is so tight. In those days qualifications were less important. For example in 1960s London anyone could just walk in for an audition, but now the questions is asked, ’where is your qualification?’ Those with brains were said to be ‘thinkers rather than feelers’ and qualifications were deemed as less important than they are today.

Actor Phil Davis was interviewed by Tony Jasper. He gave a fascinating account of his life in theatre ranging from his start as “unpromising material”, seemingly not having the characteristics of a normal successful actor, through to his current success having played roles such as Smallwood in BBC’s adaption of Bleak House.

He had no formal training in acting but managed to get his foot in the door, even after being told a firm ‘no’ when trying to get a role with the National Youth Theatre. His lack of training actually put him in good stead when, in his early years, he worked with a director who had a very idiosyncratic approach. He stressed that the teaching of drama in schools is very important. Even if someone does not go on to do this in future, it helps people to learn empathy by forcing them to look at other people’s lives and to work in a team. His favoured method of acting is to ‘think from the inside out’ rather than focus on external mannerisms etc. 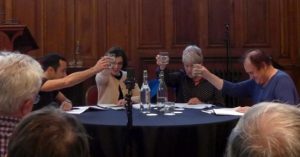 The day came to a conclusion with the performed reading of Kit Walkham’s play ‘No Time For Wittering’. Runner up Martin Hill was in attendance on the day to receive his award for his play, ‘Timepeace’.