Since the early 2000’s we have been running seasonal Gatherings.  These have been opportunities for members to come together, meet each other and often to be entertained by one or two members as befitted the occasion.

Long standing ACG member, Brian Sibley, was interviewed by Pat Harvey at the Spring Gathering. Brian is a prolific author and broadcaster and he provided fascinating insights into an extensive career.

He originally wanted to be an actor and told amusing stories of auditions which he failed to pass, dashing his dreams of a career in that particular field. However, writing was something that came naturally to him. He made the point that sometimes you can be unaware of what you are gifted at because the gift comes so naturally so it took a little while before he made serious attempts to enter this profession. He spent a short stint working at a bank and would write when he got the chance. His break came when he submitted a script on the 12 days of Christmas to BBC radio. This was accepted and read on air by Penelope Keith and provided a foot in the door at the BBC and thus began the start of an illustrious career.

A good number of ACG members and guests met at Café Eterno for ACG’s summer gathering. Old connections were strengthened and new ones were made over a glass of champagne with strawberries and cream.

The focus of the evening was a presentation of the work of Art Action UK by its director, Kaori Homma. This charity is run by Kaori and Meryl Doney, who was also present. Kaori talked about how the vision for the charity developed out of her contact with Japanese artists who had been affected by the tsunami, earthquake and resulting nuclear fallout in 2011. A number of artists found their way to Kaori’s home and as she interacted with them and learned more about the situation she began to think about ways in which she could help. She came up with the idea of raising funds to enable Japanese artists to come to the UK for a period of respite. At the same time they would have the opportunity to exhibit their work and highlight the situation in Japan. .

This ’Respite Residency’ project has turned out to be more successful than could have been hoped and Kaori emphasised how God’s grace had opened doors and enabled the project to gather momentum. .

Kaori expressed her thanks to ACG for its help in managing the funds and she said that it would not have been possible without such support.

This year’s artist, filmmaker Hikaru Fujii, was involved in a number of very successful events. One of these was held at the Japan Foundation in London and it was their best ever attended event. In addition to the success of the events in the UK, enormous interest was generated in Japan with coverage in the press and media. A similar event has now been organised by an institution in Tokyo inspired by the Respite Residency project. .

Kaori highlighted the difficulties being experienced in Japan. The effect of radiation is an unknown but very real danger. As well as the danger to health it has also produced social problems such as ’nuclear divorce’ where, for example a wife decides to move far from the contaminated zone but the husband decides to stay because of work. .

To support the work of Art Action UK you can donate online at www.everyclick.com/artactionukresidency

At this Gathering Tony Jasper organised a great evening’s entertainment.

Tony interviewed Julie Rayne, Lynne Bradley, and Colin Burns about their latest work and gave them an opportunity to entertain us with songs, poetry, and guitar solos. The evening was interspersed with some quick-fire comedy from Tony Jasper, sketches partnered with Julie Rayne, and even a musical quiz. The evening ended with a rendition of the Aussie Carol, amongst other carols, and it was closed with a reflection on Advent shared by Chris Norris.

On 12th July we were treated to an evening of entertainment from singer and ACG board member, Jennifer Moore. Jennifer’s excellent voice was accompanied by Chris Hill on double bass and Jamie Salisbury on keyboards. Her set featured a number of original jazz flavoured, contemporary songs in an intimate setting and all who came thoroughly enjoyed the evening. Jennifer has a CD available of her songs. If you are interested in purchasing one and hearing her music please visit her website.

Before and after there was the opportunity for friends to catch up and for new friends to be made. It was great to see a number of new visitors to the Gathering.

Members and Friends were invited to this Gathering for a time of fellowship. This was a free event.

The evening commenced with a chance to socialise, drinks and nibbles provided. Later in the evening Andre Radmall gave an interesting talk, provoking some discussion and questions, about his recent play Dance Class and how he came to write it.

One year after the Tsunami and the Fukushima Nuclear disaster in Japan, the media coverage in UK has emphasised the stoic nature of the victims and the financial and logistical capability of the Japanese government; however the reality is far from these portrayals. While the number of dead or confirmed missing is approximately 20,000, 260,000 people are still living in temporary emergency accommodation and the number of people committing suicide is sky rocketing, predicted to reach 50,000 by the end of this year. And Japan has yet to find out the long-term effect of radiation exposure to the younger population.

As a result of this, Kaori and other artists have been trying to find a way to help with their limited means as artists.

Your support through this auction will help our immediate project in summer 2012, which is to establish a residency in London for young artists who are affected by the disaster. 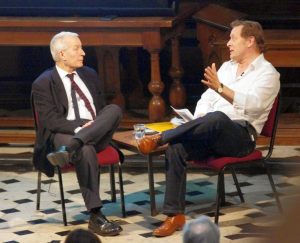 This evening event, arranged for us by Norman Stone, was an interview with Frank Field MP. This fulfilled more than our greatest expectations as Frank gave us an insight into his unique approach to a life in politics not so much led by the party line but by his own conscience and innate faith. Those of us who remember the last days of Maggie Thatcher as Prime Minister were mesmerised by the very personal account given to us by Frank about the night she resigned. Would that more politicians could approach their careers with such empathy and understanding of the needs of their constituents and the nation as a whole. Norman then took questions from the floor.

Our thanks to Norman for leading such an informative discussion.