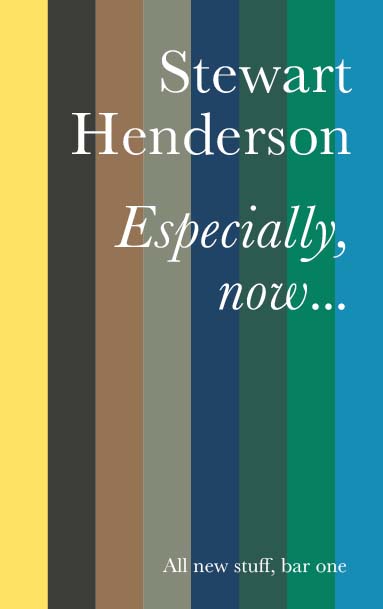 Best selling poet, lyricist and broadcaster, Stewart Henderson has published a new collection of verse, Especially, now….which sees him at his ingenious and subversive best.   Throughout the 28 poems, the inequities, elations and false currencies of our times are scrutinised.   Funny and exhilarating, trenchant and tender, Especially, now…is both consolation and celebration, a revealing of the metaphysical in the seemingly mundane, ‘words to whistle in the tumult’.

‘He understands the packed power of words; the importance of their use and measure’.   Gillian Reynolds, radio critic, The Sunday Times.

Following on from his 2018, ‘A Poet’s Notebook…with new poems…obviously’,  Especially, now…continues the pattern of giving the context and influences to a few of the poems, by way of an explanatory introduction.   As an added bonus there are five poems in the section, ‘Reading Corner’, following on from Stewart’s three best selling, children’s collections, including Who Left Grandad At The Chipshop?, shortlisted for the Scottish Children’s Book awards. ‘Essential reading’ The Sunday Times.

‘Especially, now…’ is onlyavailable from www.stewart-henderson.com@ £6.99 plus £2.50 p&p. Published by Plover Books.